YOU ARE HERE:   Home >  Articles >  Mormonism >  Out of the Cults: The Drummer's Testimony

For more information on Mormonism, please visit our web catalog; or click here to order a free information packet. 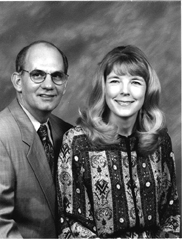 Out of the Cults: The Drummer's Testimony

Ron and Cathy Drummer had just finished Thanksgiving dinner with their son Derek when he told them that he needed to speak with his dad. Derek then shared with Ron, a pastor at a Baptist Church in Texas, that while away at school, he had called a toll-free telephone number he had seen in a television commercial for the Church of Jesus Christ of Latter-day Saints. He told Ron he ordered a free Book of Mormon, intending to present the plan of salvation to the Mormon missionaries whom he knew would be visiting him-he was going to win them to Christ!

To his surprise, when he asked them if they knew they would go heaven when they died, they answered yes, and claimed that they were secure in their salvation because they had trusted in Jesus as their personal savior! He could hardly believe it! He thought Mormons weren't Christians, but here they were, telling him that they trusted in Jesus.

Little did Derek know that Mormons use many of the same words and phrases-even the name of Jesus-that true believers do, but mean something entirely different by them.

Derek then shared with his dad how the missionaries had encouraged him to pray for a "spirit of truth," seeking to know if the Book of Mormon was true.

Derek later shared more of his journey into Mormonism and told Ron and Cathy that while he was praying at the Mormon Church, the Mormons that were there prayed over him and he started shaking all over. Derek told them he received a spiritual testimony, (he mistook this for the Holy Spirit; see 1 Timothy 4:1). He took this as evidence that the Book of Mormon was true. The he dropped the bombshell. He had decided to join the Mormon Church and was baptized in early December of 1998. His plan was to become a Mormon missionary.

God had another plan. Ron and Cathy and their church, and many Christian friends all over the country started praying for Derek. Ron then called the Arlington, Texas office of Watchman Fellowship. Over several months, James Walker and Timothy Oliver spent hours counseling with Derek and his parents, both in the office and over the telephone. Timothy focused on the "works" nature of the Mormon gospel compared to the biblical gospel of grace, while James concentrated on some of the scriptural and prophetic errors of Mormonism. Prayers to God for Derek were answered. Through the work of the Holy Spirit, Derek realized that he had been deceived. He told his mom and dad that he was not sure that he had ever truly accepted Jesus as his savior. They then had the privilege of leading their son to the Lord and Ron Baptizing him as a new believer.

Derek and his family are deeply grateful to the supporters of Watchman Fellowship for making sure through their prayers and financial gifts that Watchman is available for others like the Drummers. Thanks be to God for His great work in the life of this young man and his family.

10.6 million - dollar settlement agreed to by a Chicago hospital and two psychiatrists for damages caused by using recovered memory therapy on a patient.

100,000 - people in the U.S. that the Inner Peace Movement claims to have trained to communicate with their guardian angel.

2,000 - dollars spent for a Bible that belonged to atheist Madalyn Murray O'Hair.

1,000 - Universalist Unitarian Congregations in the U.S.

63 - medical schools in the U.S. offering a program in spirituality and medicine.

50 - people at Toronto Christian Airport Fellowship who claim that gold and silver fillings supernaturally appeared in their mouths.

20 - Colleges or Universities banning the International Church of Christ from their campuses.

6 - Mormon Temples to be built in Southern cities in the next year.

5 - year waiting period for sainthood process, waived for Mother Teresa by the Pope.

15 - years after his death, before the cause for sainthood was begun for Pope Paul VI (who has yet to receive sainthood)

And there is salvation in no one else; for there is no other name under heaven that has been given among men, by which we must be saved." Acts 4:12

And it shall be, that everyone who calls on the name of the Lord shall be saved. Acts 2:21

This article was excerpted from the April 1999 Vantage Point.

For more information on Mormonism, please visit our web catalog; or click here to order a free information packet.