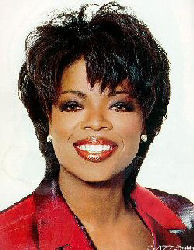 The Gospel According to Oprah

According to Oprah Winfrey's introduction page on the world-wide-web, the Oprah Winfrey Show is the highest-rated talk show in television history, seen by 15-20 million viewers each day in the U.S. in 205 television markets, and in 132 countries. In fact, it has been the number one talk show for 12 consecutive seasons. Since it's beginning in 1986 it has received 32 Emmy awards.

In 1996, Oprah began Oprah's Book Club designed to get America reading again. Each of the books selected has become an instant bestseller averaging sales of over 1 million copies each.

In 1997, Oprah was named Newsweek's "Most Important Person" in books and media, T.V. Guide's "Television Performer of the Year," the People's Choice Award for "Favorite Television Performer," and in 1996, Time Magazine recognized Oprah as one of America's "25 Most Influential People."

Tragically, America is almost obsessed with celebrity idol worship. Recent Gallup polls demonstrated how true this is when it asked Americans to list and rank the most influential women in recorded history. Oprah Winfrey ranked fourth! There is a common recognizable refrain that "When Oprah speaks, people listen."

However, the primary issue here is not that Americans tend to look to media celebrities as role models, although these people lead probably some of the least ideal lives to emulate. The issue before us is the steady stream of messages and advice that Oprah and her favorite guests communicate to the millions of people who are starved for meaning and purpose in life.

Clearly, Oprah Winfrey has been converted into the New Age Movement. And one of the biggest deceptions is that she apparently doesn't know it. Many of her favorite guests are major New Age proponents and authors, and Oprah contributes to the enormous popularity and sales of their books.

Oprah is on a mission. Repeatedly stated, her "mission" is, "I want people to see things on our show that makes them think differently about their lives...To be a light for people. To make a difference...to open their minds and see things differently…how to get in touch with the spiritual part of their life." Unfortunately, the "light" Oprah offers is the "angel of light" (2 Corinthians 11:14), and "opening their minds," in this case means their brains fall out-they become empty headed (Romans 1:21-25).

Oprah was raised in a black Baptist church in Mississippi. It is not known whether she had a healthy exposure to Christianity or a distorted one, but she is clearly in the process of deconstructing Christianity and reframing it into a New Age perspective.

During the show Oprah related, "I was raised a Baptist and we were too hung up on traditional ways. I was sitting in church and heard that God is a jealous God. I asked 'Why?' Come on-let's get over it!" She related a "jealous God" to an insecure God.

In the program Oprah revealed that she doesn't think God is hung up on what you believe about God-whatever that "force" is, it doesn't care what you call it. He doesn't have an ego problem. She states, "I believe in the FORCE-I call it God." She also said if you believe in a rhythm of nature and in love, then you believe in God.

Oprah, in typical New Age fashion, has reduced God to human limitations, and dismisses objective absolutes, substituting emotions as the criteria of truth. This constant refrain of a nebulous concept of love as a guiding principle is very deceptive.

God warns us that the heart is very deceptive (Jeremiah 17:9, Proverbs 12:20). Jesus warns that the heart is an untrustworthy guide for truth, especially the "uncircumcised" heart (Matthew 12:33-35, 15:18,19). New Agers have raised the level of feelings or emotions (intuition) as a navigator beyond all rational proportions.

Particularly instructive for us all is the fact that Oprah doesn't seem to be aware that she has been seduced deeply into the New Age world-view. We say instructive because one could relate to the subtle and deceptive processes that Oprah appears to have fallen prey to.

On one recent show a Christian in the audience challenged Oprah about being a "New Ager." Oprah responded, "I am not new age anything and I resent being called that. I am just trying to open a door so that people can see themselves more clearly and perhaps be the light to get them to God, whatever they may call that. I don't see spirits in the trees and I don't sit in the room with crystals."

Oprah has made the mistake of narrowly defining the New Age Movement. However, read the following beliefs expressed by Oprah over the last few years.

Oprah's close friend and sometimes guest, Shirley MacLaine described on a show how to meditate, going inside yourself, asking your own "intuitive Self" to seek answers to life's questions. Oprah responds, "You know, that is the same as the Bible says, 'Ask and it shall be given, seek and ye shall find'." Shirley confirms.

Oprah then asks Shirley, "When you connected to the higher Self...knowing that you can do anything that you want to do-is it what other people describe as being 'born again'?" Shirley nods, "Yes, probably."

It is amazing that so few people catch the duplicity of New Agers when they attack the authority and trustworthiness of the Bible and the Christian church, but then quote it-almost always out of context-or twist it so support their position. For example, Oprah had as her guests a New Age panel consisting of Don Curtis (a Unity minister and trance-channeler), Kevin Reyerson (Shirley MacLaine's channeler), and Marilyn Ferguson (New Age leader and author of The Aquarian Conspiracy. After comparing the evolution of the New Age Movement in our culture with the "new understanding" advent of the Protestant Reformation, Oprah states, "As I read more of Shirley MacLaine, crystals, and The Aquarian Conspiracy, it seems to me to say what the Bible has said for years. It is just that many of us were brought up with a more restricted, limited vision of what the Bible said."

(The Christian should require Oprah or other New Ager to explain on what basis they reject the clear historical communication in literary forms of the Bible in lieu of their very subjective, esoteric, surrealistic interpretations).

Don Curtis responds that the problem comes from "the literal interpretation within denominationalism, because no one really knows, (apparently no one but Mr. Curtis) through the filter of translation down through the ages, what the Bible really says...most of it and reincarnation was thrown out in 325 A.D. at the Council of Nicea." Oprah responds, "Right."

When this kind of pseudo-scholarship goes unchallenged the effect can be serious. How many non-Christians or even Christians are knowledgeable of church history, the early church councils and the science of Biblical textural criticism which through tedious research and archeology has allowed us to see how accurate and preserved the Bible is? Very few; and certainly not Oprah.

Oprah also related that, "One of the most important books I've read is Eric Buttterworth's (a New Age Unity leader) Discover the Power Within You. In it he said "Jesus did not come to teach us how divine He was but to teach that divinity was within us." Later she said that "It (claiming exclusive Divinity) would make Jesus the biggest egotist that ever lived."

On the recent show with new age panel Betty Eadie, Sophy Burnham, and Dannion Brinkley, Oprah positively alluded to the book Ishmael by Daniel Quinn, stating in summary, "..that one of the biggest mistakes humans make is to believe that there is only one way. Actually, there are many diverse paths leading to what you call God."

When corrected by a Christian in the audience that Jesus said He was the only Way, the panel lost their composure, coming unglued. Oprah reacted, "There couldn't possibly be only one way...Does God care about your heart or whether you called His Son Jesus?"

Oprah's consistent theme is to inspire people to take control of their lives, to not be controlled by others or by circumstances. She is always advising "You can choose what happens." While there is some truth and value to this philosophy it is fatally tied to the New Age philosophy. As Oprah states, "You are responsible for your life-the power of God is within you [whether you are a Christian or not], above you and through you. You control your life."

What this fails to acknowledge is that man does not define reality; man does not determine what truth is. The source of truth for our decisions and power is the one true God of all reality and He has communicated plenary propositional truths to us in the Bible and remarkably, uniquely in His incarnation in Jesus Christ.

Oprah, as with other New Agers, is not in pursuit and in communion with God but is in pursuit with the "image of God"-by elevating man to Divinity. The problem with this is the God of the universe has not called us to join ourselves to the creation but to Himself, "the Creator who is blessed forever" (Romans 1:25).

For an expanded version of this article or additional information regarding this subject contact our Birmingham office and request, "The Gospel According to Oprah."

Recommended books for responding to the new age and postmodernism (available through Watchman Fellowship):

Prices are subject to change

This article was excerpted from the July 1998 Vantage Point.